100% of donations made will be allocated towards Sarcoma research 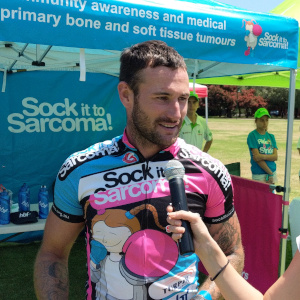 "Recently a close friend of mine’s daughter was diagnosed with Sarcoma. It was then I realised I knew nothing about this form of cancer. There is a real lack of awareness from the general public but also more importantly general practitioners.

"I want to support this event because by making more people aware of sarcoma and its symptoms, we have a better chance of saving lives. Early treatment provides a better chance for a better outcome."

If you have any queries, please contact us at info@rideandstrideforsarcoma.org.au or call 08 9427 1744.

About Sock it to Sarcoma!

Sock it to Sarcoma! was first established in 2012 in partnership with Hollywood Private Hospital Research Foundation and became its own independent charitable entity in December 2015. It is registered with the Australian Charities and Not for profit Commission and has Deductible Gift Recipient status. For more information visit our website www.sockittosarcoma.org.au